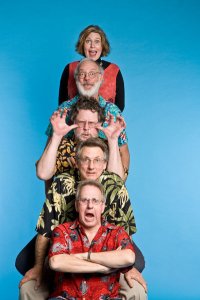 The most laughable band in show business
The Austin Lounge Lizards are a satirical folk/country/bluegrass band based out of Austin, Texas. The band consists of founding members Hank Card, Tom Pittman, and Conrad Deisler, along with Darcie Deaville (2008) and Bruce Jones (2010). The band is best known for highly literate, sharply pointed lyrics that poke fun at politics, love, religion and the culture in general. The name comes from a story told by Deisler, "I think it was a slang term I'd heard my grandmother use to describe gentlemen of easy virtue who hung around in bars. When we started out, that's just what we were doing—hanging out and playing for beer and tips and stuff like that."
Advertisement:

Their politically-themed songs tend to have a liberal leaning, which poke fun at conservative politicians (The Ballad of Ronald Reagan, Gingrich the Newt) or satirize current political issues (Go Ahead and Die). All the group’s members contribute to songwriting, but the two principal songwriters have been Card and Deisler. Card’s lyrics often rely on clever word plays, double entendres, and off-beat but sometimes poignant narratives about ordinary life. His most frequent subject matter is love, especially comically forlorn yearning. (The Dogs, they Really Miss You). Deisler’s lyrics, in contrast, focus on the existentially absurd, often combining absurdly unexpected pairings (such as making Richard Petty the subject of a surreal Luis Buñuel film) as well as pitiable, sometimes lovable characters bewilderingly unaware of their own absurdity and oddness (Wendell the Uncola Man). The band often pokes fun at country music clichés, for example the "we were happier when we were poor" trope exaggerated into absurdity in "Love in a Refrigerator Box". Deisler's lyrics also marry comedy with a remarkably dark vision of humanity and its future (Bonfire of the Inanities).

Several of their songs have been made into music videos, including Too Big To Fail

, Go Ahead And Die

, and The Drugs I Need

. Their cover of C-U-B-A was also featured in Michael Moore's film Sicko.