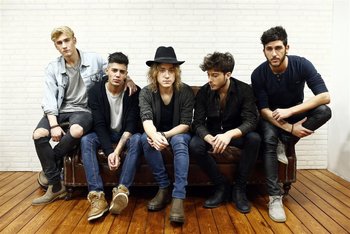 In the same year, they released their first album, Endless Road 7058, which was financed by themselves and their manager since, unlike most boybands, they didn't have any record label backing them yet. The album was a surprise hit and helped them land a record deal with Warner in 2012. Since then, other three albums have followed: Anti-Heroes (2013), Circus Avenue (2014) and Ghost Town (2015). On July 2016 the band announced a temporary hiatus after Blas Cantó signed to participate in the fifth season of Tu Cara Me Suena.

The band provides examples of these tropes: