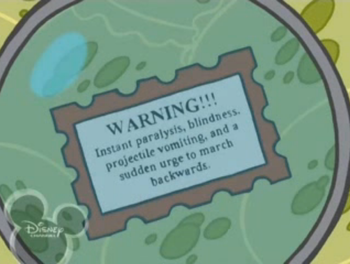 That very rarely happens all at once to the same person.
"Warning: You will get fucked up, murdered, blown up, exploded, and killed."
— Michael Jones, Burger Time!

U.S. note Direct to consumer advertising for prescription drugs is illegal in every country except the US and New Zealand pharmaceutical advertisers face a difficult dilemma. Because of truth-in-advertising laws, any commercial giving indications for use of a prescription drug must give full disclosure of side effects.

This means that drug commercials come in the following four flavors:

Also, many commercials try to invoke a viewer's "Attention Deficit... Ooh, Shiny!" by having interesting, pretty scenes distracting them from the laundry list of side effects being rattled off. They do this by showing interesting situations like an asthma medication showing an elephant representing difficulty breathing following a man around during his day, or a world made of plumbing for a medication which helps you control frequent urination.

Of course, if you've actually talked with your doctor about your problems, then your doctor would already have told you if Stupidoxin was right for you. But pharmaceutical companies continue to heavily advertise because you might have been too embarrassed to mention the problem to your doctor until you realized there was a treatment for it. Or you might not have considered it to be a problem at all until you saw the commercial with all the other people who were horribly embarrassed by their yellow toenails/hairy knuckles/insufficiently-lustrous eyelashes/etc, and realized that you needed to get the cure. Or even worse, you might have told your doctor about your problem but didn't request Stupidoxin by name, and so your doctor prescribed an equally-effective generic brand instead! (Somewhere an ad man is crying.)

The prevalence of these commercials has resulted in this trope often being played for laughs, with the side effects being a ridiculously long list, the effects disproportionately bad compared to the condition the drug is supposed to treat, or the side effects becoming extremely bad, often including death, only to finish off with an incredibly mild condition like bad breath or a small rash.

Compare and contrast What Were They Selling Again?, where specifics about the product are obscured unintentionally. Objects with more extreme or fantastic warnings fall under Do Not Taunt Happy Fun Ball. If the company selling the products is actively malicious it is May Contain Evil.

Examples include (consult your doctor for more information):

Side effects of this TV Tropes entry may include Ruining your life, Author Appeal, Gorn, Brontophobia, Brontosaurophobia, and Involuntary Shapeshifting. This TV Tropes entry is not for children under 12, people who are nursing or pregnant, are about to become pregnant, have been pregnant before, are trying to become pregnant while reading this entry, pregnant nurses, or people with gall bladders. Prolonged use may result in over-extending humourous situations to the point where they are no longer amusing or the ensuing of hilarity.

I'd probably choose weed over this, too.

I'd probably choose weed over this, too.