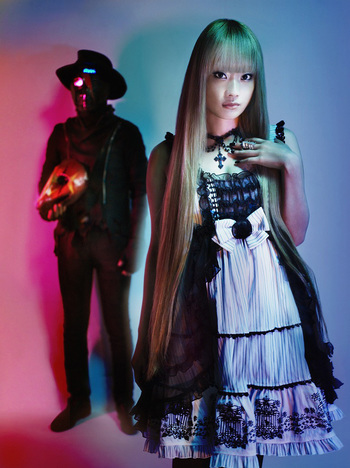 Aural Vampire is a Japanese Electronic Music band, their music being described as Darkwave with Industrial influences. They are sometimes classified as Visual Kei, though it is not their focus. Formed in 2004, they've spent most of their career as a duo consisting of EXO-CHIKA (vocals & lyrics) and RAVEMAN (music). In 2012 they added new members for the first time: Wu-CHY (bass), Higuchuuhei (guitar), ZEN (keyboard), and IZU (drums).
Advertisement:

They have a bit of a cult following in the West thanks to frequently appearing at conventions there.