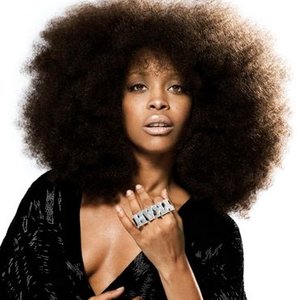 Her cypher keeps moving like a rollin' stone.
"Art is the absence of fear"
— Erykah Badu
Advertisement:

Erykah Badu (born Erica Abi Wright, February 26, 1971) is an American musician from Dallas, Texas. She is best known for helping in the rise of Neo Soul.

Her rise to fame came in the late 1990s with her first album, Baduizm, which came out in 1997. The first single, "On & On", was a huge hit, and the album received positive reviews from critics. The album debuted at number two on the Billboard charts, and gained many awards. She also recorded her first live album, aptly titled Live, During this time, she became notable for her fancy African headwraps, which came in many colors.

In 2000, she recorded her second album Mama's Gun, which, according to critics, "had a more organic sound than her last record". It spawned the hit "Bag Lady", which remix topped many charts. It was also nominated for a Grammy Award.

Her next album, Worldwide Underground, came out in 2003, and while not getting as great criticism as Mama's Gun and Baduizm did, it nonetheless got good reviews. It, according to Erykah herself, was designed to be "one continuous groove".

In 2010, she caused some controversy with the video for her song "Window Seat", in which she gradually stripped herself nude while walking through a Dallas neighborhood in full public view. The video was inspired by a group called Matt and Kim's music video for their song "Lessons Learned".

Also notable for being barred from entry into Malaysia by the immigration and customs in 2012, on the grounds of putting on a temporary tattoo of the Arabic glyph for "Allah" in one of her earlier shows in some other countries, due to the Information Minister of the time listening to the demands of the extremist conservatives. Needless to say her Malaysian fans aren't happy with the government's move.

Her music incorporates elements of R&B, Hip-Hop, and Jazz. Her later albums also incorporate elements of Electronica and Funk. Lyrically, she is known to be very deep, as opposed to most R&B music. She's also known to explore her African heritage a lot, as if her headwraps, clothing, and constant afros give any indication.