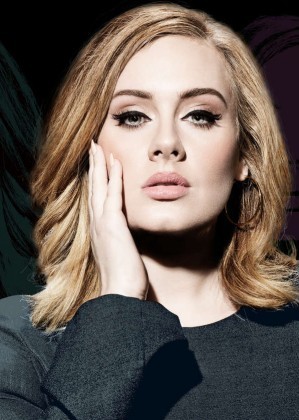 Adele Laurie Blue Adkins MBE (born 5 May 1988), usually known by only her first name, is a British R&B singer who has gained fame for her soulful vocal performances. She won Best New Artist and Best Female Pop Performance for "Chasing Pavements" from her album 19 at the 2009 Grammy Awards.

The second album, 21 (2011) fared even better, and she is flying high with the commercial and critical success. In the UK, Adele is the first living artist to achieve the feat of two top five hits in both the Official Singles Chart and the Official Albums Chart simultaneously since The Beatles in 1964. 21 has also spent eleven consecutive weeks at No. 1, the longest ever by a female solo artist on the UK Albums Chart, surpassing Madonna's nine weeks at number one back in 1990. On top of that the album has spent 23 non-consecutive weeks at No. 1 on the Billboard charts, more than any other female artist. At the 2012 Grammys, 21 won six awards, including Album, Record and Song of the Year. So not only did Adele tie Beyoncé for the most Grammys won by a female artist in a single night, she became just the sixth person to win the "big three" in a single night and only the second artist to win all four General Field categories (Best New Artist + Big Three), a feat that hadn't been matched for thirty-one years.

Her success in North America came somewhat by a twist of fate. She was scheduled to perform on Saturday Night Live in October 2008, the same night that featured Sarah Palin as a guest star. The stunt with Palin gave SNL its highest ratings in years, and just so happened to expose Adele to a whole new audience. Her worldwide fame has only been growing since then.

She also sang the theme song for the James Bond movie Skyfall; said theme won the award for Best Original Song at the 70th Golden Globes (2013), the 56th Grammy Awards (2014) and the 85th Academy Awards, becoming the first Bond theme singer to win an Oscar.

On October 23rd, 2015 Adele released her first single in 3 years, "Hello," creating a massive buzz worldwide and paving the way for the release of 25 on November 20th. While it didn't fare quite as well with critics and listeners, it was still hailed and praised from coast to coast, America and Europe.

Not to be confused with Adele Dazeem, Adele Sandé, who actually goes by her middle name Emeli, or Adele Astaire, Fred Astaire's sister and dancing partner.

We could have troped it allllll, troping in the deeeeeeeep...