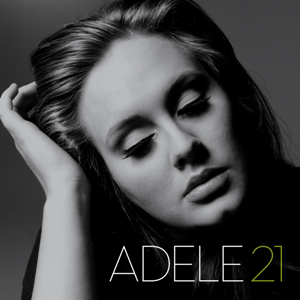 Sometimes it lasts in love
But sometimes it hurts instead
"Adele’s soul-inflected pop appealed to Baby Boomers nostalgic for Etta James, Carole King and 'Dusty in Memphis'. It also appealed to teens struggling with the first sting of heartbreak, hipsters who missed Amy Winehouse, traditionalists weary of synthesizers and vocal effects and non-pop fans who simply found it refreshing to hear a singer belt out her blues with conviction. By singing almost exclusively about a relationship gone wrong, Adele made songs that anyone could identify with. Conventional wisdom says that in the fragmented post-modern era, an artist must target her demographic carefully, but '21' wasn’t niche-marketed. It was made for everyone and — surprise! — everyone listened."
Tris McCall, Newark Star-Ledger
Advertisement:

Battling writer's block in her attempt to follow up the surprise success of 19, Adele recorded ten songs influenced by the country and bluegrass sounds her North American tour had exposed her to. Only one of the ten, the ballad "Take It All", proved up to her standards, but the bitter relationship song triggered a fight with her older boyfriend, and ended their relationship. Thus inspired — and driven to drink again — Adele put together the eventual lead single "Rolling in the Deep" the very next day with producer Paul Epworth. With her writer's block obliterated, Adele got back to business. Over the course of the next few months, she finished the modern era's answer to Rumours.

21 won Adele many, many awards

throughout its run of chart dominance, topped off with the both the Brit Award and the Grammy Award for Album of the Year in 2012. Also at the 2012 Grammys, "Rolling in the Deep" won Best Alternative Song, and "Someone Like You" won Best Pop Solo Performance.

The release of the Concert Film/Live Album Adele: Live at the Royal Albert Hall on 29 November made her the first artist to ever hold a year's top-selling DVD, album, and single all at once. Her performance of "Set Fire to the Rain" at that concert won the 2013 Grammy Award for Best Pop Solo Performance, giving her consecutive awards in the category. The concert film went ten-times Platinum on its own in the United States.note The RIAA does not have a Diamond certification for video albums. Yet.

We could've had it allllllll! Listing all the trooooooooopes: