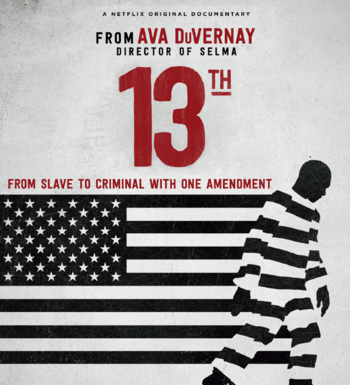 13th is a 2016 documentary feature by Ava DuVernay.

It is a history of the criminal justice system and how it, according to DuVernay, has been used as a tool of oppression against the black people of America. The film starts by noting that the 13th Amendment to the Constitution, which eliminated slavery in the United States, contained an exception: "except as a punishment for crime whereof the party shall have been duly convicted". The film then traces the use of the legal system to perpetuate slavery by another name, starting with the "convict leasing" system in the immediate aftermath of the Civil War in which legions of black Americans in the South were convicted of crimes and then rented out as slave laborers. With slavery came the Jim Crow segregation system, in which for a hundred years after the Civil War, blacks were consigned to a permanent underclass status by the force of law.

The civil rights movement and the federal civil rights laws of the 1960s led to the end of de jure segregation, but that was replaced by the War on Crime and the War on Drugs, which led to a massive increase in the prison population, with black men being targeted far out of proportion to their numbers in society. The film connects this to the prison industrial complex, a network of for-profit prisons and their associated vendors that make untold millions by keeping people in jail, and also notes that prisoners serve as slave labor in the modern day in a very similar manner to the convict leasing of the 19th century.