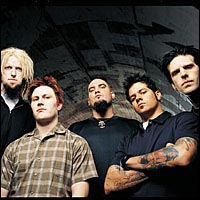 Adema is a Nu Metal band formed in 1999 from Bakersfield, California. In regards to the Nu Metal aspect, don't say such to any of the members as they refuse to acknowledge themselves as part of the genre and humbly see themselves as a plain grunge, Alternative Rock or hard rock band. They received prominent attention in 2001 with the release of their gold-selling, self-titled album Adema which catapulted the group to popularity during the 2001-2004 time frame, numerous gigs and shows such as Ozzfest and Korn's Family Values tours, as well as a place with other famous acts such as Linkin Park and Korn (the former of which lead singer Chester Bennington and Joe Hahn appeared in the music video for their song "The Way You Like It", and the latter of which lead singer Jonathan Davis is the older half-brother of Mark Chavez, Adema's former lead singer, and unfortunately a fact many refused to stop acknowledging).

The band is well known by fans and music goers alike as one of the most dedicated and hardest working bands in recent memory. They are also notoriously and unfortunately infamous for their apparent trouble of keeping lead singers. Back in 2003 at the release of their second studio album "Unstable" the band endured the departure of one of their guitarists Mike Ransom after a supposed fall out with lead singer Mark Chavez followed by being dropped by their first label, Arista Records, and then accumulated with the abrupt departure of Mark Chavez in early 2004.

The band however kept their heads up and soon picked up steam with the arrival of a new front man Luke Caraccioli and their third studio album "Planets". Sadly, Luke left later on in the year after a supposed falling out with the members, leaving them without a lead singer. Fast forward two years later and the band received their third frontman Bobby Reeves and a second guitarist Ed Farris and released their fourth studio album "Kill The Headlights".

The band then went into a brief hiatus and then shocked fans and the industry as a whole with the announcement both Mark Chavez and Mike Ransom were returning for a reunion tour AND a joining forces for a fifth studio album which the fans were insanely happy to hear. It wasn't meant to last most unfortunately as Mike Ransom showed minimal interest in the tour and left not long after and then Mark Chavez himself yet again left the band due to personal differences, leaving fans disappointed and heart broken.

Since then, long standing lead guitarist Tim Fluckey took over both guitar duties and assumed the role of lead singer for the band with long standing bassist Dave Deroo and long standing drummer Kris Kohls and have held the camp a float as they did not wish to give up on their fans and were determined to continue making music. They are currently preparing to release their long awaited fifth studio album "Topple The Giants" and plan to go on tour throughout the year.

During the Summer of 2013, Mike Ransom returned to the band thus bringing the lineup to four. Sadly, despite rumors, Mark Chavez did not return to the band. However, he came back to Adema in 2017... only to leave AGAIN in 2019. This time he was replaced by Ryan Shuck.

Adema has the following trope examples