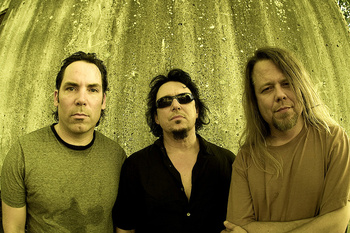 Bruce Spencer, Mike Roe, Mark Harmon
"Singer and guitarist Mike Roe, at the time, was arguably one of the greatest rock frontmen working, a twitching live wire of charisma and gusto and swagger. Where so much of the bad end of Christian rock feels like it was parbaked in a germ-free environment, Roe had absorbed decades worth of actual rock history – mostly from the ‘50s and ‘60s – and understood instinctively that fronting a rock band was not the same thing as leading eyes-closed acoustic worship at the weekly teen service. . . . Almost as important, Roe looked like a rock frontman – a wild shock of Robert Smith hair perched atop his pale, bony face, Roe at the time was enigmatic without even trying to be. There was something renegade about his whole demeanor, the sense that he was some sort of Jim Jarmusch Rock Singer Character, a ghost without a past who appeared out of nowhere and could just as easily return to the same."
J. Edward Keyes, An Atheist's Guide to Christian Rock
Advertisement:

The 77s (occasionally the Seventy Sevens) are a Christian Rock band from Sacramento, California. Their one consistent member throughout their four-decade history has been the singer and guitarist Mike Roe, whose range and abilities as a vocalist and a musician are sizeable. Christian rock pioneer Larry Norman described the 77s as being "Too Christian for the radio, and too radio for the church," as the band's lyrics featured explicitly Christian themes while their music remained accessible to secular audiences.

They released their first album, Ping Pong Over the Abyss, in 1982 and, by 1987, seemed to be on the cusp of a mainstream breakthrough, with a self-titled album set to release on Island Records in April. Unfortunately for them, a few weeks before their album was to come out, Island released its biggest hit of the decade: U2’s The Joshua Tree, and, depending on whom you ask, the 77s were left without much label support. This iteration of the band didn't last much longer. Roe put out some unreleased tracks under a variety of names in the late '80s and early '90s, and then reformed the band in the 1990s, first as a quartet and then as a power trio, its membership staying stable since 1995.

The band has played a wide variety of music over the years, as most long-running acts do: They began as a New Wave act, but by the time the '90s had rolled around, had become much more influenced by Blues Rock and Hard Rock. In the Christian rock community, they were known for walking an uncomfortable line between Christian and secular, with many of their lyrics dealing frankly with topics like abortion and premarital sex that were generally considered off limits for Christian bands.

7&7iS / Michael Roe and Mark Harmon