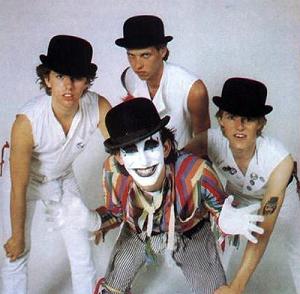 The Adicts (sometimes also known as Fun Adicts and ADX) are an English Punk Rock band from Ipswich, Suffolk. They are characterized by their use of droog-inspired outfits and lead singer Monkey's clown clothes and makeup, as well as their playful and lighthearted music. They were one of the more accessible Punk Rock/Pop Punk bands of the 80s alongside The Undertones and Buzzcocks, earning them a following with younger audiences and a chart landing with their 1982 album Sound of Music.