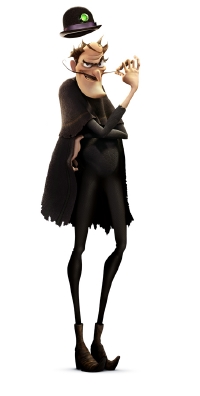 A bowler hat is a rounded felt hat commonly worn from the 1850s to the early-to-mid-1900s, especially in Victorian Britain and The Wild West. Bowler hats were once considered the national hat of England, and used to be associated with the upper-middle class there, especially with bankers, in the early half of the 20th century.

Nobody is sure why bowler hats can be associated with evil characters, since most of the time they show a character who is civilized. Irony, perhaps? (Or Affably Evil, even Faux Affably Evil!) Some creators might also be aware that a bowler is actually a fairly functional helmet (it was originally designed to protect gamekeepers on horseback from low branches), so a character wearing one may be anticipating getting into a fight.