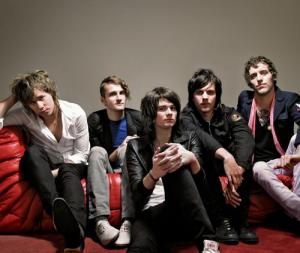 So take a chance and make it big
Cause it's the last you'll ever get
If we don't take it
When will we make it?
Advertisement:

The Academy Is... is a band from Chicago under the Decaydance label, owned by Pete Wentz. They were originally called "The Academy" but the Is... was added later in 2004 to avoid legal problems. The band came together in 2003 and went on to release three albums, "Almost Here," "Santi," and "Fast Times at Barrington High." Members included William Beckett (lead vocals), Mike Carden (rhythm guitar, backing vocals), Adam T. Siska (bass, backing vocals), Andy 'The Butcher' Mrotek (drums) and Michael Guy Chislett (lead guitar, backing vocals, piano). On May 24th, 2011, an official announcement was made about the departure of band members Andy Mrotek and Michael Chislett. Although the band had made plans for a 4th studio album and an announcement was made by Beckett that they had begun recording, they eventually disbanded. On October 8th, 2011, mere months after they had lost two members, the band announced that they had decided to go their separate ways.

They were often grouped as part of the "Fueled By Five" (five bands from their label, Fueled by Ramen), which also includes Fall Out Boy, Panic! at the Disco, Gym Class Heroes, and Cobra Starship.