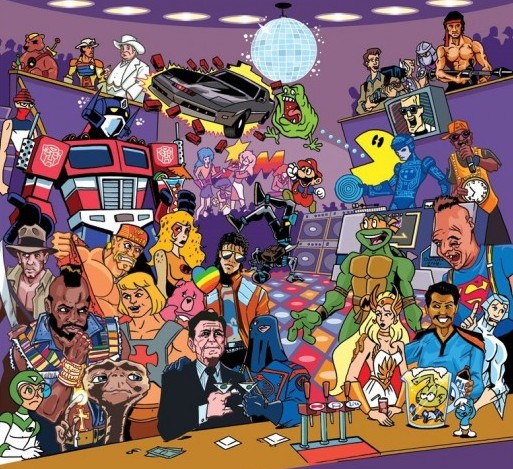 'Twas a good decade for pop culture.note The '80s Strike Back by Ryan Dunlavey

.
"Legend has it that man once washed his jeans in pure acid!"
— Stephen Colbert, The Colbert Report

The Excessive Eighties: a time where you wake up before you go-go when you want to kick off your Sunday shoes as you walk the dinosaur like an Egyptian for 500 miles, hear doves cry or feel the Punky power like a virgin while you moonwalk the Thriller.

All the men were preppies who wore pastel suits with narrow ties, drove sports cars that Lee Iacocca personally stood behind and traded stocks on Wall Street - after all, as Oscar Wilde said, nothing says success like excess. (Unless they happened to be teenagers, in which case they were Totally Radical or studied Karate and learnt the meaning of "Wax On, Wax Off".) Everyone had huge hairdos, enough make-up to sink a ship and power suits with shoulderpads big enough to knock the giant mirrored sunglasses off anyone who walked within a three foot radius of them. And those without them had flat-tops and wore gym clothes and break-danced on top of cardboard. Millennials (then known as "Echo Boomers" and later "Generation Y") started being born, one day to become the young adults of The Turn of the Millennium.

Computing technology first became a true cultural force in this decade, starting a trend that would keep on snowballing to this very day. The Eighties was the decade of cell phones literally sized and shaped like bricks, jokes about being unable to program VCRs, the death of Betamax, and the beginnings of personal computers and gaming consoles beginning to proliferate inside homes, perhaps one of the trends from this decade with the largest of cultural implications. Cable television also took off big time, with MTV, TBS, HBO, and CNN becoming household acronyms, though the video itself was all grainy, low-definition analog. However, this still looked better than the often-fuzzy antenna-based picture before cable.

Conversly, the eighties were also the high water mark of analog culture. CD players were a new and exotic technology. Heck, digital watches were still a (relatively) new and exotic technology. Most people still got their music on LP or cassettes (though the CD format would begin to overtake both late into the decade) and their news from newspapers delivered in the predawn darkness by Free-Range Children. The Commodore 64 was the most common personal computer and an actual PC cost as much as a used car, especially if it was equipped with one of those new and exotic five or ten megabyte hard drives. The internet was still confined to academia, the World Wide Web was still just a pipe dream, and what little connectivity existed was through Electronic bulletin board services (BBS) accessed over analog phone lines using screeching 1200 or 2400 baud modems.

In the US, it was also the secondnote The first wave was Astro Boy up through Speed Racer wave of The Japanese Invasion, the inklings of which started in '78 with the dub of Battle of the Planets, continuing on with Space Battleship Yamato ('79), Voltron ('84), getting even more hardcore with Robotech in '85, and hitting its apex by cranking the quality Up to Eleven with the nationwide release of AKIRA ('88).

On the homefront, the 1980s produced a rash of pop-cultural icons that today are looked upon, at worst, with Affectionate Parody, and at best, as the national ideal. The conservative political culture of the era meant two rather contradictory things for the production of pop-culture; on the one hand, the surge of private enterprise together with new media technologies allowed corporations such as Hasbro an unprecedented ability to build massive franchises around their products, typically with a TV show and accompanying toys, but on the other hand, Moral Guardian complaints would challenge the ethics of making a show that was "essentially one large commercial." The result was the rather spoof-worthy And Knowing Is Half the Battle segment common to many mass franchise shows, shoving an Anvilicious moral into the action. Fortunately, these were conveniently located after the actual plot, so kids could just turn it off at that point and run down to buy the toys. Besides, the segments make great joke fodder.

Politically, in the first part of the decade, Cold War tensions continued to escalate. The US did things like invading Grenada and the Strategic Defense Initiative. Some accuse this of being an intentional move by the West to render the economically inept Soviet Union infeasible by drawing its resources away from things like infrastructure and feeding its people, which market economies could accomplish easily. While this is, essentially, what ended up happening (though more complicated than that in real life; in Eastern Europe the decade's real deathblow to communism was considered to have been all the new media technology), the fact that the other possible outcome of such a strategy was global thermonuclear annihilation had a profound impact on Western media tropes. Most obviously, dystopian Speculative Fiction, particularly set After the End 20 Minutes into the Future, enjoyed a surge. On the other hand, Star Trek became a defiantly optimistic mainstream Sci-Fi mainstay with the feature film series and its return to live action TV with Star Trek: The Next Generation.

The second part of the decade, however, couldn't be more different. Mikhail Gorbachev, spry for a CPSU leader at age 54 (this was the only time in the Cold War that the Soviet leader was substantially younger than the American), shook up the by-then sclerotic Soviet leadership upon taking power in 1985. Gorbachev restructured the economy (perestroika) for "accelerated" development (uskoreniye), encouraged openness (glasnost), made tentative moves towards democracy (demokratizatsiya), and went Karting with Reagan. For a hot second in 1988-89, it seemed like the USSR had reached a final rapprochement with the West. And then came The Great Politics Mess-Up.

Throughout this era, there came new problems like the spread of AIDS which created a public health panic that dealt first a body blow to the gay community with anti-gay people treating them as modern lepers (even though that community took the danger seriously far sooner than others) as well as ending the sexual liberation movement of the previous two decades. However, the epidemic paradoxically later proved a partial blessing in disguise for gay rights as stricken people like Rock Hudson were shoved out of the closet, forcing the public to realize that LGBTI people were all around them, much like themselves. The Eighties also had the highest murder rate in U.S. history, almost twice what it is today. As for society as a whole, well, the left and right weren't quite the sodium-and-water combination that dominated the bulk of the '70s, though the dominance of conservatism with the Reagan and Thatcher administrations and the continuing fallout from the political blunders of the preceding decade (i.e. Watergate & Vietnam in the US and a severe economic recession in the UK) still kept them at odds with one another.

Politically speaking, the decade lasted roughly from November 4, 1980 with Ronald Reagan being elected President and the end of the Iran Hostage Crisis

20 minutes after his inauguration on January 20, 1981 to the Soviet Union dissolving on December 26, 1991, amounting to almost 11 years. (Sometimes Margaret Thatcher being elected Prime Minister in 1979 is considered the start, especially in the UK.) Culturally, the decade lasted roughly from Disco Demolition Night

Thanks to a common twenty- or thirty-year lag, it's still The Eighties in much of Fictionland. Although The '70s and The '90s are gradually returning.

Popular tropes from this time period include:

Many things were created or existed in the 1980s:

Works that are set/were made in this time period include:
(Note: many were also a part of the Nineties; usually those made in the later part of the decade, and are marked with a '*').

For films released in this time period, see Films of the 1980s

For series released in this time period, see Series of the 1980s

Random Joe: And knowing is half the battle!
Chorus: G.I. JOOOOOOEEEEEEE!

Alternative Title(s): The Excessive Eighties, The Decade Of Excess