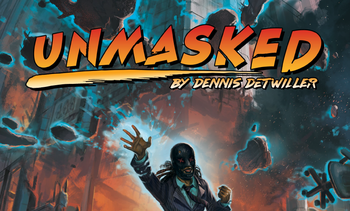 Unmasked is a Tabletop RPG setting written by Dennis Detwiller and designed for the Cypher System by Monte Cook Games. Set in 1986 America, its protagonists are teenagers, called prodigies, who gained the ability to take on an alter-ego called the mask-form with superpowers only seen in comic books.

Prodigies are teenagers who wake up in a world that has suddenly changed, but only they can see it. Some event has filled the world with mementos, objects containing a single special one-use power. Only prodigies can recognise mementos, and they know what one can do when touching it. Likewise, they are also able to see other prodigies. Some mementos call to prodigies, driving them to assemble them into a mask. When the mask is worn, the teen becomes the mask-form. The teen and the mask are two different entities, with different races, different genders, or even species, as well as goals. The mask isn't you... or is it? And the forces behind the mask-forms, as well as their ultimate source, remain mysterious and frightening.

The default setting for Unmasked is Boundary Bay, New York, a fully fleshed-out small town on northern Long Island. Beyond this setting, there are also detailed instructions about running campaigns in the United States in the 1980s, with a whole part explaining how towns were commonly organised, how schools usually worked, etc.

Like all other Cypher System settings, Unmasked comes with a conversion guide, allowing you to easily mix-and-match elements of Unmasked with compatible settings including Numenera and The Strange.