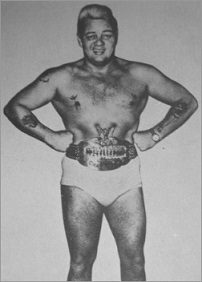 Henry Faggart (1930-2013) was an American Professional Wrestler and trainer from Concord, North Carolina as Jackie Fargo. He is best known for his work from the 1950s through the early 1980s in the Memphis and Alabama territories, though he and Don Fargo broke attendance records with their match against Antonino Rocca and Miguel Perez at Madison Square Garden in 1957. He is credited with introducing tables and chairs into the Southern brawling style in Memphis. He also trained Memphis' all-time #1 star, Jerry "The King" Lawler and, in the storyline, put together Steve Keirn and Stan Lane as The Fabulous Ones. He retired in 1984, though he had a few comeback matches in 1985 and 1991, and teamed up with Lane and Cory Macklin to defeat Lawler and The Rock 'n' Roll Express at "Memphis Wrestling Throwback Night III- A Nightmare in Memphis" on October 30, 2004. Along with other National Wrestling Alliance legends, he appeared at NWA TNA #1 on June 19, 2002. Among his in-ring achievements, he was a 15x NWA World (Mid-America) Tag Team Champion

. He also originated the "Fargo Strut" later brought national by Ric Flair and used by the Fabulous Ones and, later, Jeff Jarrett. He was inducted into the Wrestling Observer Newsletter Hall of Fame in 1996. He died of heart failure at the age of 82 on June 24, 2013.