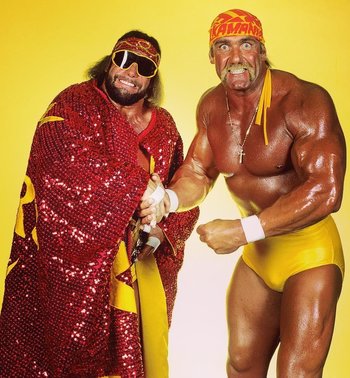 L-Randy Savage; R-Hulk Hogan
"With the Madness and the Mania as one guiding force, we could go ahead and take the whole WWF!"
— Hulk Hogan, Saturday Night's Main Event, October 3, 1987
Advertisement:

The team first formed in 1987. Savage was in the middle of a Heel–Face Turn and a bitter feud against then-Intercontinental Champion The Honky Tonk Man. A feud which saw Savage and his manager/love interest Miss Elizabeth suffer many beatings from Honky and his allies. During one such assault by Honky and the Hart Foundation, Miss Elizabeth went to the locker room and brought out Hogan to aid Savage. The two shook hands afterwards and the Mega Powers' formation was official.

The crowning moment for the tag team was at WrestleMania IV, when Hogan came out to help Savage defeat Ted DiBiase to become the new WWF World Heavyweight Champion. The duo would continue teaming together until early 1989 when Savage, who accused Hogan of lusting after Elizabeth, attacked Hogan in February and turned heel again. The two would face off at WrestleMania V, with Hogan defeating Savage for the title. Savage and Hogan would continue feuding for the rest of 1989, having one last bout on The Main Event in February of 1990, where Hogan again defeated Savage.

The Mega Powers would reform in 1994, when both Hogan and Savage went to WCW. They were briefly referred to as the "Monster Maniacs", but would later return to the original name. Hogan and Savage would spend the next couple years feuding with the Dungeon of Doom and The Four Horsemen, all culminating in the infamous "Doomsday Cage" match at Uncensored 1996 were Hogan and Savage defeated eight men from both stables by themselves.

The Mega Powers would break up a second time on July 7, 1996, when Hogan shocked the world by leg-dropping a battered Savage and joining forces with Scott Hall and Kevin Nash to form the New World Order. Savage and Hogan would feud again, having their payoff at Halloween Havoc 1996 with Hogan and the nWo getting the upper hand. Savage would disappear from television until early 1997, where he shockingly joined the nWo himself. Hogan and Savage would occasionally team together as part of the nWo, again feuding with each other in 1998 when Savage had defected from the nWo along with Nash and Konnan to form the nWo Wolfpac. They crossed paths again in 1999, where Savage dropped his world championship to Hogan in July.

In 2000, both men joined the "Millionaire's Club" faction, but they would never team together again as both left WCW that same year.

Hogan and Savage's love/hate relationship extended to real life, with Savage blaming Hogan and his ex-wife Linda for Elizabeth divorcing him in 1992. From that point on, they would alternate between being friendly with each other to almost coming to blows, with Savage challenging Hogan to a real-life fight for charity in order to settle their differences. The fight never happened, but was referenced by Savage on his 2003 rap album Be a Man (on the title track in fact). Upon Savage's death of a heart attack in May of 2011, Hogan claims that he had made peace with Randy not long before his passing. Despite their ups and downs, the two are no doubt pioneers of the wrestling business and whether they were allies or enemies, they always had crowds lined up to see them interact.