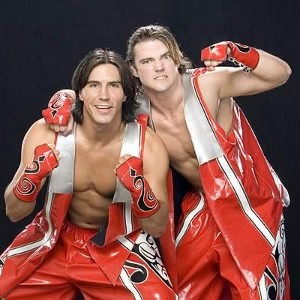 Paul London and Brian Kendrick were a professional wrestling tag team best known for their time together in World Wrestling Entertainment (WWE). The team never had an official team name, but were just referred to as "the tag team of Paul London and Spanky" then "the tag team of (Paul) London and (Brian) Kendrick." In 2006 London and Kendrick put the tag team name "The Hooliganz" on their wrestling attires and tried to convince the WWE management to start calling the team by that name, but were unsuccessful in their attempts. However, many fans and especially smarks called them 'The Hooliganz' as they intended.

They first began teaming together in 2003 as a part of WWE, but Kendrick left the company shortly thereafter. When he returned in mid-2005, he and London reunited as a tag team. In May 2006 the duo won the WWE Tag Team Championship from MNM; it was Kendrick's first title victory with the company, and London's third. Their reign was the longest since WWE created the title in 2002, and they became the fourth longest-reigning tag team champions in the company's history, finally dropping the titles to Deuce 'n Domino in April 2007.

Later in 2007, London and Kendrick were drafted from WWE SmackDown to the Raw brand, where they briefly held the World Tag Team Championship. They would continue to work together until Kendrick was drafted back to SmackDown in the 2008 supplemental draft, thus disbanding the team until 2010, when they reunited in Pro Wrestling Guerilla following their releases from WWE. They have since reunited on several occasions and have won the Scottish Insane Championship Wrestling Tag Team Titles, where they were billed as the Hooligans, while Kendrick has come back to WWE as a participant in a Cruiserweight Classic tournament and a member of the Raw Cruiserweight division. In 2016, London debuted on Season 3 of Lucha Underground as the face of the mysterious Rabbit Tribe.

Tropes associated with London and Kendrick include: