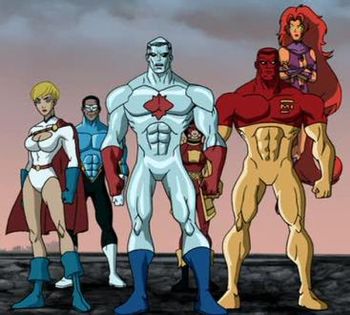 No hero is complete without a bodybuilder's physique.
"Men should be buff, women should be vavoom!"
— Hiromu Arakawa
Advertisement:

We all know that certain things come along with having superpowers. No, we're not talking about responsibility, justice, or even the American way (or whatever is their Evil Counterpart, for the morally villainous). We're talking about a great body.

Wherever spandex and capes are found, so too are sculpted chests, broad shoulders, narrow waists, and washboard abs. Wherever there are chainmail bikinis, there are large breasts, curvy hips, and shapely legs. It could almost be called a secondary power in itself - the ability to have a perfect physique.

This is true even for heroic men whose powers do not include physical strength, such as psychics, speedsters, and super-scientists. For example, you wouldn't expect someone with an Imagination-Based Superpower to have a bodybuilder's physique just from concentrating on things really hard, but it is so. It's just become a convention of the genre, and many comic book artists don't know how to draw in any other way. Even ordinary civilians will often be implausibly muscular.

This is mostly Justified, since many superheroes/supervillains seem to spend a great deal of their off time training rigorously, or for that matter, running around and getting exercise on the job (that goes double if it’s a Badass Normal superhero with no powers like Batman or Green Arrow, or even if it’s a hero with skills centered on fighting and martial arts like Goku). Basically, being a hero or villain, especially a superhero/supervillain, often means that you’ll be getting a lot of exercise and physical activity on the job, so you’ll probably be losing weight and building muscle really fast. It’s also for that reason why you don’t see many fat and overweight superheroes/supervillains running around. Because if a someone like that did become a superhero/supervillain and actually made a successful go out of it, they probably wouldn’t stay fat or overweight very long.

Or maybe they're this way after getting their superpowers. Although one should note that, for females at least, reducing body fat tends to make a figure a lot less lush than that of the typical superheroine/supervillainess. And forget about Stout Strength.

Note that in classical sculpture, the term "heroic proportion" refers to characters with healthy figures who stand eight or more heads high (i.e. their head is an eighth or less of their total height). This imposing figure was used for statues of Greek gods and later biblical figures (Michelangelo's David, for instance). It is a given that almost all western superheroes and supervillains are eight-and-a-half heads tall or more, and most fashion designers sketch their ideas onto outlines of over eight heads. However, in early Marvel comics, as well as a few from other houses, this rule was subverted: heavily built figures were often drawn with huge heads in proportion to their height so that they looked squat and burly despite being over six foot (see early versions of the Thing, Hulk or the Kingpin).

Super-Trope to Most Common Superpower.

Tien shows up to train with Chiatzou.

Tien shows up to train with Chiatzou.