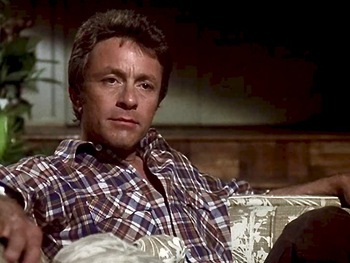 "I learn about acting by watching real people. If I’m trying to interpret a new character I’ll find someone who suits that character and I’ll watch him."
Advertisement:

He first appeared in The Many Loves of Dobie Gillis and became a noted character actor in the 1960s. He soon got a lead role in My Favorite Martian, which lasted for over 100 episodes before it was cancelled for budgetary reasons.

After a few years and more character appearances while turning down the male lead in That Girl, Bixby eventually got the lead in The Courtship of Eddie's Father, which earned him an Emmy Award nomination. After that, he starred in the short-lived The Magician in 1973 before he got the role that would prove to be his greatest.

That, of course, was as Dr. David Banner in The Incredible Hulk. Though initially reluctant to take a "comic book role", Bixby soon came around after reading the script. His performance made him a late '70s/early '80s pop culture icon who helped to define the tragedy and soul of the character ever since.

After that series ended, he later acted in the short-lived sitcom Goodnight Beantown, hosted the Nickelodeon biography series Against the Odds, and directed episodes of Wizards & Warriors and Sledge Hammer! before returning to the Hulk in three TV movies. There was to be a fourth TV movie but, sadly, it wasn't in the cards...

Bixby died of cancer in 1993 at age 59. He was director of Blossom at the time and worked, often lying on a couch or bed on the set, up until a few days before his death.