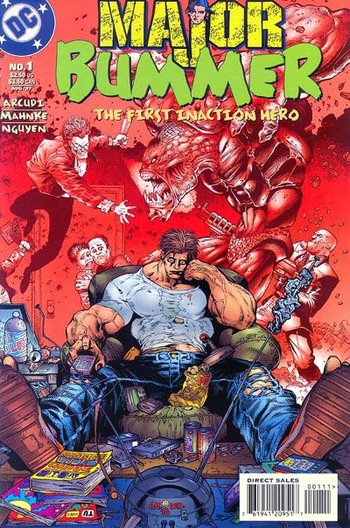 Major Bummer is a humorous Superhero Comic Book created by John Arcudi (writer) and Doug Mahnke (artist), published by DC Comics between 1997 and 1998, set outside the regular DCU. The series follows Lou Martin, slacker extraordinaire, who wakes up one day with superhuman muscles and strength and capable of building rayguns in his sleep. Lou, committed to an existence of videogames and B-movies, tries his hardest to keep the powers from changing his life — but usually fails.

Constantly trying to enlist Lou in the fight against evil are a group of "superheroes" with more goodwill than actual ability: The Gecko, a nerdy guy who can walk on walls; Val, a girl with the power of flight; Francis, a haughty hippie with a sonic scream; and Lauren, an old lady who can see the future but not usually concentrate long enough to communicate it. The threats faced by the team include, among other things: a team of equally incompetent "supervillains", a Loony Fan of Lou's who gives "help" that's arguably as dangerous as the villains themselves, and the Tyrannosaurus Reich — an intelligent Nazi T. Rex from Another Dimension.

As it turns out, the superpowers are a "gift" from Zinnak and Yoof, two alien college students who are writing a thesis on Earth hero culture: part of their project is sending out "extreme enhancement modules" (EEMs) that give superpowers, attract their hosts to each other — be them friend or foe — and attract trouble in general. Lou’s EEM was actually meant for Martin Louis, an activist and philanthropist, who would have whipped the team into shape — but taking the module back from Lou would kill him — which he objects to.

The series suffered from low sales and was eventually cancelled after fifteen issues, but at least Arcudi and Mahnke had time to write a properly epic Grand Finale — as close to epic as Lou can come, at least — involving a Time Crash. Due to its status as something of an oddball in the DC lineup the series was not reprinted for a long time, until Complete Major Bummer Super Slacktacular finally came out in 2011.