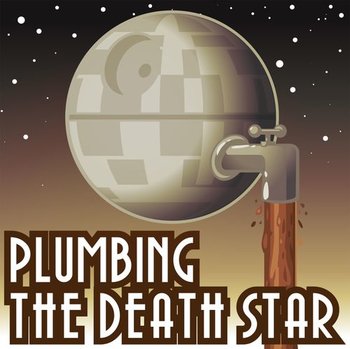 We ask the important questions.
"Because seriously, who deals with super weapon sanitation and imperial employee agreements?"
Advertisement:

is a Podcast run by the Melbourne-based Sanspants Radio network.

Each episode is based on a different question regarding Fridge Logic in a particular film, comic book, video game, or any other piece of popular media, whether it be Beyoncé's "Single Ladies" or The Muppets. Based around Rule of Funny more than anything else, the show has never taken itself seriously, so expect the cast to take the most ludicrous tangent possible away from the topic of the episode.

The show is hosted by the affable and silly Jackson Baly, editor-in-house Joel Zammit, and the loud and aptly named Joel Duscher, who have taken the not-so-elegant name "The Plumbing Boys." The Boys frequently make use of guest stars to add some variety, most frequently the Dungeons & Dragons expert and the nerdiest of the bunch, Adam, Sanspants regular Zoe Bilotta, Ducktales-podcaster Michael Williams, and others.

The podcast also has two sub-series: Plumbing the Death Eaters, which exclusively deals with Harry Potter and is largely just a part of the larger podcast, and Plumbing the Death Star Presents Movie Maintenance, which eventually branched off into its own show with a rotating cast. It also gave rise to a podcast dignifying recurring guest Adam, known as DND Is For Nerds.

The podcast can be found here