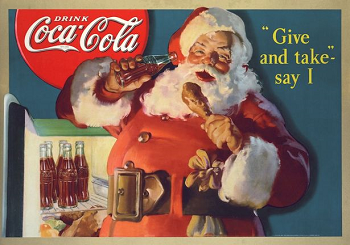 "Well, if they're not here for the Christmas pitch, I can't help them find new ways of tying their product in to Christmas. That's why I'm chairman of this board! Let's hear it for me!"
— Mr. Scrooge, from Stan Freberg's "Green Chri$tma$"
Advertisement:

Some people ask themselves what they can do to show the Christmas spirit. The people who make TV commercials ask themselves how Christmas can showcase their product. The veneer on this facade is as thin as the snow on the Hollywood sound stages these commercials were filmed on. See also Christmas Rushed and Christmas Creep.

Bob Cratchit: Well, I guess you fellas will never change.
Mr. Scrooge: Why should we? "Christmas" has two S's in it, and they're both dollar signs.