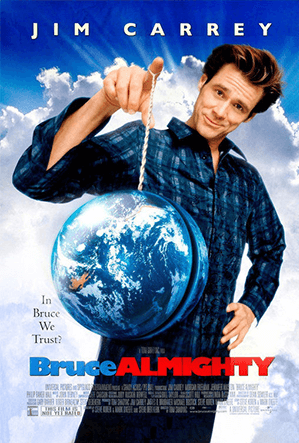 Phenomenal Cosmic Powers... Itty-Bitty Brain Space.
God: Anyway, I'm here to offer you a job.
Bruce: J-Job, what job?
God: My job. You think you can do better, so here's your chance. When you leave this building, you will be endowed with all of my powers.
Bruce: ...Sure. Whatever you say, pal.
(Bruce rushes out, walking on water in the process)
Advertisement:

Bruce Almighty is a 2003 comedy film directed by Tom Shadyac and starring Jim Carrey, along with Morgan Freeman, Jennifer Aniston, and Steve Carell.

Bruce Nolan (Carrey) is a down-on-his-luck television reporter in Buffalo, New York. After being turned down for a job as an anchorman, he complains to God (Freeman) that He isn't doing His job the right way... so God gives Bruce His powers to see what he can do with them.

Though the film received mixed reviews, it is currently Carrey's highest-grossing film, picking up almost half a billion dollars worldwide. It received a sequel, Evan Almighty, with Steve Carell's Evan Baxter (a supporting character from this film) as the lead.