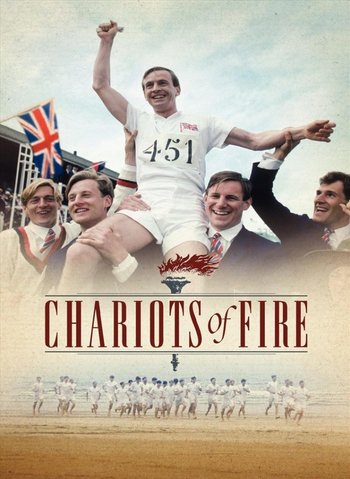 "I believe God made me for a purpose, but He also made me fast. And when I run I feel His pleasure."
— Eric Liddell
Advertisement:

The film is based on the Real Life track and field athletes Harold Abrahams and Eric Liddell, who competed for Britain in the 1924 Olympic Games. The film does have a large dash of Hollywood History, but was still impressive enough to be nominated for seven Academy Awards, winning Best Picture, Original Screenplay (Colin Welland), Costume Design (Milena Canonero), and Original Score (Vangelis).

by Vangelis, which at the time was a bold departure from other period pieces which typically used orchestral scores.