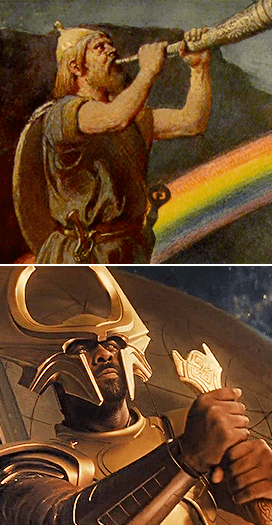 In simplest terms, this trope is showing a deity with a standard appearance in a form people don't expect to see it in.

People expect deities to look a certain way. They expect the Hindu Goddess Kali to be an Indian woman. They expect the Norse God Thor to be a red-bearded Viking man (or blond and clean shaven). But what if a work shows Kali as a white man and Thor as a tiny Chinese woman? Well, that would be this trope.

A common subversion on the "old white guy with a beard" take on the Abrahamic God is for God to take on the appearance of a minority group instead, usually either black or female (or both). Sometimes, this stretches across to other religious figures, such as the Devil or angels. This could manifest as a subtle and humorous take on discrimination, or if done badly might come across as the Magical Negro trope on steroids. Of course, it could also be nothing more than the creator doing something different.

Sometimes it will be hinted that people just see whatever they want to see. This trope also shouldn't come across as a surprise for entities who are proudly shapeshifters.

Note that just because an example of this trope involves taking the appearance of a minority group doesn't mean that it's also an example of Token Minority. See also Race Lift and Gender Flip.

Not to be confused with Ethnic God, which are gods who are tied to a specific locale or people.