Comic Book / The Wicked + The Divine 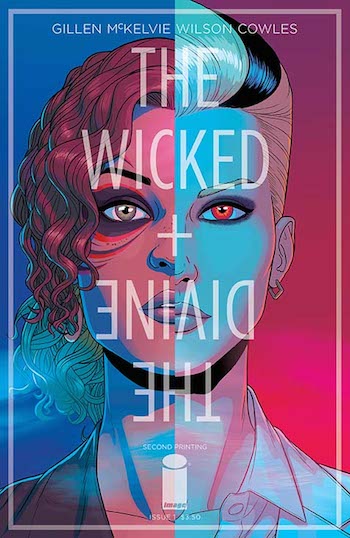 Laura on the left, Luci on the right.
"I want everything you have."
— Laura
Advertisement:

The Wicked + The Divine is a comic series written by Kieron Gillen, illustrated by Jamie McKelvie, colored by Matt Wilson, and lettered by Clayton Cowles. It is published by Image Comics.

This is the latest "Recurrence", as the gods put it, and they're the sensation that's sweeping the nation. Equivalent to rockstars, they perform in sold out shows, hold crazy raves, and have die-hard fans. One such fan is Laura, who's been to see every god she can. She especially loves Amaterasu, but things take a turn for the mysterious when she is personally greeted by the prince of lies, Lucifer (or Luci as she calls herself). Soon she finds herself caught up in a conspiracy involving all of the gods, their mysterious backer, and her frenemy Cassandra as they try to unravel the truth about the recurrence.

The series is divided into 8 arcs:

In addition, several one-shots done by guest artists spotlight the Pantheons from previous Recurrences. These are collected in the 8th TPB called Old is the New New, released March 2019, in the middle of the final arc. While they were published in the order listed below, the trade orders them by plot year.

Two one-shots were different: collections of shorts done by different artists (and writers, in The Funnies). Included in the Old is the New New trade.

In May 2015 it was announced that Matt Fraction and Kelly Sue DeConnick will be producing a television adaption of the series (as well as the former's comic, Sex Criminals) with Universal. No creative talent have been attached to the project and it appears to have slipped into Development Hell.