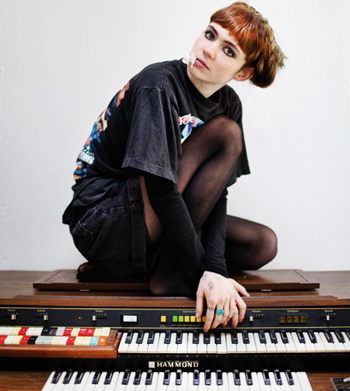 Claire Elise Boucher (born March 17, 1988), better known by her stage name Grimes, is a Canadian singer-songwriter, producer and visual artist. While she generally works in the field of experimental electronic music, her sound is known to cover a wide range of genres including Dream Pop, Synth-Pop, R&B, and Hip-Hop.

Her name is a reference to the artist Ken Grimes, and to UK grime music, which she listed as her three favorite genres on her MySpace page without even knowing what the genre was.

Born and raised in Vancouver, Grimes started writing and recording songs while in college, which made her miss a great number of classes and led to her being expelled from her university. She then dedicated herself to be a full-time musician, collaborating with various DJs such as Majical Cloudz, making an EP with musician d'Eon and opening shows to singer Lykke Li.

She began releasing independently in the late 2000s, but it was her third album Visions in 2012 that catapulted her to fame, predominantly on the strength of its singles "Genesis" and "Oblivion", with the latter frequently considered among the decade's greatest songs.

Also achieved Memetic Mutation for looking like Helga Pataki. Compare for yourself

Grimes and her music contain examples of: