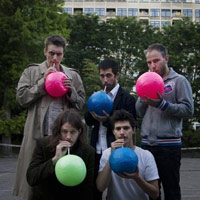 An Alternative Rock band from Copenhagen, Denmark. Less generally, they have elements of Baroque Pop, Dream Pop, Electronic Music, folk, post-rock and (starting with their third album) indie pop. The core members of the band are Mads Brauer, Casper Clausen and Rasmus Stolberg. Rune Mølgaard was part of the original line-up until 2007, but now only performs with them sometimes; similarly, drummer Thomas Husmer left the group in 2011 leaving it as a trio. They are probably best known for their song Mirador (the Animated Music Video of which has over a million views on YouTube) and their recent free single Modern Drift.

In 2016, the trio joined forces with live drummer Tatu Rönkkö under the name Liima. They released two albums before getting back to work on Efterklang's fifth album, and the first sung in the Danish language, Altid sammen.

"Efterklang" means remembrance or reverberation (literally, it means "after sound"). They actually got the name from one of their electronic musician friends who was using the latter definition of "Efterklang"

to explain the technical concept.