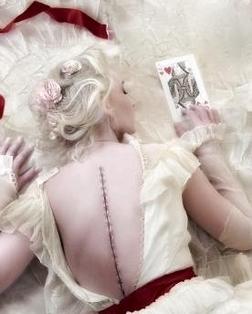 Hannah Fury is a female musician. Her most famous album, The Thing that Feels, contains several songs based off of Gregory Maguire's Wicked novel. A later EP has other Wicked related songs not on the album.

She has been compared to Tori Amos and Kate Bush, but her style is unique. While her early albums were primarily piano based, later ones involved synthesizers and drum machines, incorporating rap into the mix. Her vocal style is characterized by overlapping, whispery vocals, and low and high octaves.

Her songs generally deal with love, and alternately deal with sadness and nightmares in constructive and seductive ways. Aside from music, Hannah also makes jewelry, sometimes customizing them for fans.

This musician and her works contain examples of: