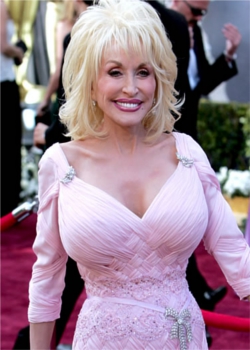 We'd say puberty was inordinately kind to her.
"Workin' 9 to 5,
What a way to make a livin,
Barely gettin' by,
It's all takin' and no givin'
They just use your mind,
And they never give you credit,
It's enough to drive you crazy if you let it."
— "9 to 5"
Advertisement:

Dolly Rebecca Parton (born January 19, 1946) is a Country Music singer-songwriter, actor, and businesswoman with over 3,000 songwriting credits to her name. The fourth of 12 children, Parton began singing in her childhood, and recorded a few songs that gained some regional attention in the South. She signed with Monument Records in 1965, where she released a handful of singles. Popular Country star Porter Wagoner was impressed with her, and hired her as the featured female vocalist on his syndicated TV show in 1967. Wagoner also got her a contract with his longtime label RCA Records, both as a solo artist and as Wagoner's duet partner. A few modest hits came in the next couple of years, followed by the Number One "Joshua" in 1970. She stayed with RCA through the 1970s and into the 1980s, then switched to Columbia Records and stayed there until 1995. In her career, Parton charted 25 Number One singles, counting two different versions of her Signature Song "I Will Always Love You". Also included in her total is a duet with Brad Paisley, "When I Get Where I'm Going", which in early 2006 made Parton the oldest female artist to chart a Number One country song. Of course, Parton has earned several awards just for her music, including seven Grammy Awards. Her songs "9 to 5" and "Travelin' Thru" were both nominated for Academy Awards.

But her career is far more than just singing. Parton has starred in the movies 9 to 5 and The Best Little Whorehouse in Texas, both of which earned her Golden Globe nominations, as well as the beloved heart-tugger Steel Magnolias. She has also starred in several television series, mostly in cameo or performing roles.

Parton is known for her campy, big-breasted image, as well as joking about her large amounts of plastic surgery. But underneath it all, she has a really big...heart. Her list of philanthropic efforts is longer than she is tall, and includes HIV/AIDS charities, wildlife conservation, large donations to both Vanderbilt University and Vanderbilt University Medical Center of Nashville, childhood education, and her literacy campaign "Dolly Parton's Imagination Library," which gives children a book per month absolutely free of charge from birth until their first day of school. After wildfires left many in the Smoky Mountain region homeless, Dolly created the My People Fund, which not only helped to relocate families but provided them a cash stipend every month until they were back on their feet. During the COVID-19 Pandemic, she donated one million dollars toward vaccine research, an effort that was later directly credited with accelerating the vaccine's public rollout. Even her theme park, Dollywood, is something of a philanthropic effort, bringing a large amount of money and jobs to the chronically poverty-stricken Appalachian region—and this is just the stuff she's let us know about; allegedly she makes a hobby of reaching out anonymously to assist individuals in hard times. She is also surprisingly progressive for a woman of her background, openly joking about the transphobic reaction to gender-identifying bathroom laws and other southerners' general conservatism, sharing her love and appreciation for her large LGBTQ+ fandom, and expressing support for Black Lives Matter.

Her music and performances provides examples of the following tropes:

Dolly Parton's "9 to 5" is basically an ode to thankless dead-end jobs.

Dolly Parton's "9 to 5" is basically an ode to thankless dead-end jobs.