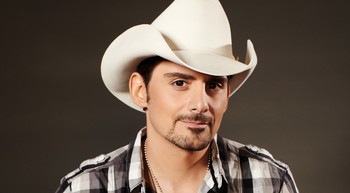 At age 27, he signed to Arista Nashville in 1999. His debut single "Who Needs Pictures" brought him up the charts, followed swiftly by his first Number One, "He Didn't Have to Be." Both were included on his highly successful debut album Who Needs Pictures. Since that album, Paisley has been no stranger to award shows, singles charts and album sales. Between 2005 and 2009, he scored ten straight #1 hits, shattering the record for the longest hot streak of chart-toppers since the 1990s (until Blake Shelton broke that record himself). Now he's best known for his controversial song with LL Cool J, "Accidental Racist", featuring both of them trying to heal racial barriers but instead coming across as being, well, accidentally racist.

Paisley sings a diverse range of music: his albums will often include plenty of tongue-in-cheek novelty numbers and comedy sketches alongside more serious ballads and quite a few stripes in between. Naturally, he gets plenty of opportunities to show off his guitar chops as well. Of particular interest to Tropers may be Paisley's knack for commentary on contemporary popular culture; he certainly seems to know a great deal about their Tropes and fan culture—refer to "Welcome to the Future" and "Online," for example.

Paisley and his now-former producer Frank Rogers also own the Sea Gayle label.