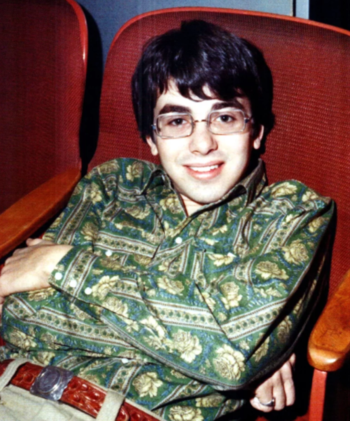 Van Dyke Parks (born January 3, 1943) is an American songwriter/producer whose musical career is known through different parts of Pop music and Americana. Aside from a wide variety of collaborators, his best known work is with Brian Wilson for The Beach Boys' Smile.

Growing up in Mississippi, Van Dyke had a musical upbringing yet started as a child actor since the age of 10, appearing in movies such as The Swan or having a recurring role on The Honeymooners (he stopped acting after getting into music and only came back once for playing in an episode of Twin Peaks). He dropped out of university before having his first music gig as an arranger for the song "Bare Necessities" from The Jungle Book. His musical career had a kickstart when he came to California and worked with various rock acts such as The Byrds, The Mothers Of Invention and Paul Revere and the Raiders on top of forming a folk duo with his brother Carson.

He also got involved in the Beatnik scene and managed to get in contact with Brian Wilson through the use of psychedelics (Van Dyke recalled that Brian viewed people consuming drugs as enlightened). Collaboration between the two songwriters wouldn't happen until the making of the infamous Smile album which remained unfinished for decades (for a variety of reasons, Van Dyke personally had a problem working with fellow Beach Boy Mike Love). Van Dyke left the recording sessions (which has since been viewed as a breaking point for the album's shelving) in order to focus on a solo career and he released his first album in 1967, Song Cycle, which had a weak reception but got a cult following later on.

Inspired by the counterculture of the late sixties, Van Dyke tried to stray away from the pop scene and invested himself in carribean music genres such as calypso, getting in contact with a steel band working for Liberace and "saving" them from him. His second album Discover America explores that calypso genre. After releasing his third album Clang of the Yankee Reaper, he focused way more on composing soundtracks (notably The Brave Little Toaster). He would reunite with Brian in 1995 for their collaborative album Orange Crate Art and later on during the completion of Smile. After an unsuccessful hand surgery in 2014, he performed his last piano performance. He remains an active musician since, occasionally working as an writer/arranger for a variety of artists including Joanna Newsom, Skrillex or Ringo Starr.