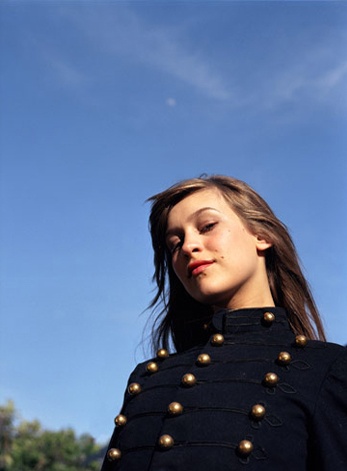 With my steely will compounded in a mighty mound that's hounded
By the snap your steel string sounded just before your snores unwound it
And in store are dreams so daring that the night can't stop from staring
I'll swim sweetly as a herring through the ether, not despairing
— "Cassiopeia"

Many of Newsom's song-poems feature complicated characters and fantasy worlds. Some are Beast Fable tales, others just describe nature, and some are classic folk. Her early work (The Milk-Eyed Mender, Ys, Joanna Newsom and the Ys Street Band) was close to Progressive Rock in its intricacy (particularly the latter two), whereas her later work (Have One On Me, Divers) has more pop and orchestral influences without completely abandoning the prog influence. Most critics call her an acquired taste, in many cases citing difficulties in getting used to her distinct singing (which is high, throaty, airy and different kinds of childlike across the years; notably, between Ys and Have One on Me, she had vocal cord nodules that required two months of complete vocal rest and also took singing lessons, resulting in a radical change in her voice).

For tropers looking to get used to her sound, great songs to start with include "Sprout and the Bean", "Good Intentions Paving Company", "In California", "Emily", "Colleen", "Peach, Plum, Pear", "Baby Birch", "Divers", and "Time, as a Symptom". Progressive Rock-minded listeners may wish to dive straight into the seventeen-minute "Only Skin".

Apropos of nothing, she is a distant relative of California governor Gavin Newsom (lieutenant governor from 2011-2019, mayor of San Francisco from 2004-2011) and as of 2014 is married to (of all people) Andy Samberg.

Tropes related to this artist: