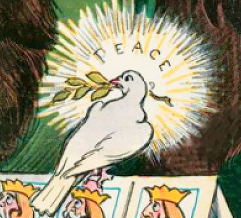 "Now the world is ready for you
And the wonders you can do
Make a hawk a dove
Stop a war with love"
— Opening theme of Wonder Woman (1975)
Advertisement:

In media, it is fairly common to depict doves as a symbol of peace. This can appear either in the form of a peace offering being a dove, a dove (or dove-like) character being a pacifist, or even a major event being symbolized by a dove. Doves can also be used in this context as symbols of love and other positive emotions, to the point of even belonging to a Goddess Of Love. Usually, when doves are depicted this way, they usually carry an olive branch in their beaks (due to the associations of olive branches with peace). This trope extends to pigeons as well, since it's just a different name for the dove. May also show up as Rule of Symbolism.

This trope is Older Than Feudalism; The Bible depicts doves as being manifestations of the Holy Spirit and God's personal messengers, which would explain its popularity in religious imagery. This is in turn inheritted from a long history of these birds as sacred in the Levant.

Sub-trope of Divine Birds. Contrast Pesky Pigeons. Compare Noble Bird of Prey, Cute Owl, The Owl-Knowing One, Bluebird of Happiness and Clever Crows for other examples of birds being depicted with positive traits. Related to Disturbed Doves.

See also Sweet Sheep, another animal that plays a similar role as doves (typically paired up) and also prominent in religions and media.