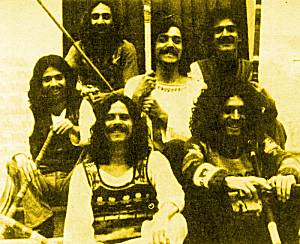 The Parra brothers (Gabriel, drums Claudio, piano, and Eduardo, electric piano) met Mario Mutis (bass) and Eduardo “Gato” Alquinta (guitars and lead vocals) in their childhood and started to play music for fun. They became prominent in Viña del Mar, playing at many gigs with a bossa-nova/bolero style. The former name of the band was High & Bass. However, most of their fans believed they were called “Jaibas” (crabs). After a while they decide to correct their name and definitely change it to Los Jaivas.

After a first phase characterized by a of more tropical sound they began to blend styles, experimenting with hippie sound, progressive rock and avant-garde jazz. Their most recognized feature it’s their blending of styles with the traditional sounds -and instruments- of the region. After the military coup in Chile the band moved to Argentina, where they stayed until 1977 when they moved to France.

The band formation changed in 1988, when Gabriel died in Peru. His daughter Juanita tooked his place at the drums. In January of 2003, “Gato” (the cat) Alquinta died in Coquimbo (Chile) of a heart attack. Actually, various of the children of the original members take their places and continue with the band until today.