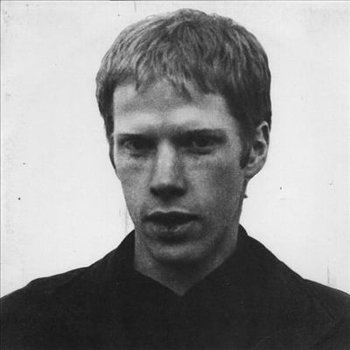 The Artist as a Young Man. Maybe.
Advertisement:

Jandek is an American Blues/Outsider Music/Who Knows artist. Officially "Jandek" is the name of an ongoing music project, but it's very clearly the work of a specific singer-songwriter, who is usually colloquially called Jandek, though his actual name appears to be Sterling Richard Smith.

Jandek's musical style is...difficult to explain, at best. He often plays unaccompanied (Though other singers and even a full band are not unheard of), strumming or picking his guitar in an unpredictable fashion (And the guitar is often tuned to a tuning of his devising), while he half-sings/half-speaks seemingly improvised tuneless melodies full of opaque, sometimes troubling lyrics. This rather abstract approach to music would already ensure that Jandek would be destined to appeal to a very selective audience, but add his being a Reclusive Artist who makes Thomas Pynchon look like an Attention Whore, with a Mysterious Past to boot, and you have the ingredients of a one-of-a-kind Cult Classic.

Jandek's albums are not for sale in record stores, nor note Until recently

available online. They can only be purchased via money order to Corwood Industries in Houston, Texas, Corwood's back catalog consisting entirely of Jandek's prodigious (Over 100 albums) discography. Jandek gives no interviews, nor any sort of promotion. He only began performing live in 2004. All of these facts contribute to the mystique, and while Jandek's following is small, it is rabid.

"YOU PAINTED YOUR TROPES":