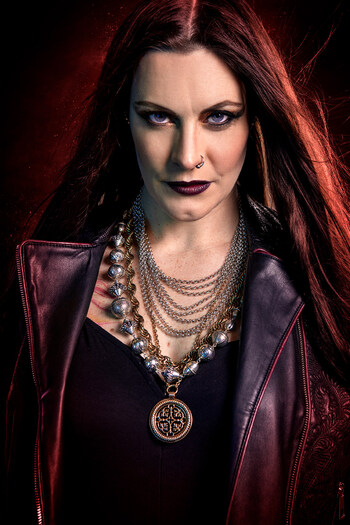 (born 21 February 1981) is a Dutch singer-songwriter best known for her performances in the Symphonic Metal genre.
Advertisement:

A dramatic coloratura soprano with a vocal range spanning over three octaves, Jansen began singing professionally with After Forever (then called Apocalypse) at age 16. She initially auditioned to be the backup singer, but the other members were so impressed they promoted her to lead vocalist, with guitarist Mark Jansen (no relation) providing death growls. She subsequently studied classical singing and musical theatre at the Dutch Rock Academy and the Conservatorium Tilburg. Following Mark Jansen's departure from the band in 2002, she became the primary songwriter.

In 2008, bandmate Sander Gommans began suffering from burnout following a performance at ProgPower USA. While there, Floor met up with Jørn Viggo Lofstad of Pagans Mind and performed a cover set of several classic hard rock songs. After Forever decided to take the following year off to wait for Gommans to recover, and over the summer Floor wrote most of a hard rock album with Lofstad, which after spending ten years in Development Hell finally came out in 2017 as Northward. After Forever ultimately broke up, and Floor formed a new band, ReVamp, with a significantly harsher and proggier sound.

After releasing ReVamp's Self-Titled Album, Floor herself began suffering from burnout. She took 2011 off to recover, and in 2012 she was at her sister Irene's wedding when she got the call that would catapult her to superstardom. Nightwish, whom she had previously met while touring with After Forever, had dismissed their then-vocalist Anette Olzon mid-tour and needed a replacement in a hurry. Floor flew out to meet them in California and had to learn the full setlist in the two days before the next show on the tour. The tour culminated in a headlining set at Wacken Open Air; her performance of "Ghost Love Score" from that show has become her Signature Song. Initially she was planned to only be a fill-in vocalist, but after the tour, the band asked her to stay on full time. The demands of her career with Nightwish unfortunately eventually led to ReVamp being disbanded.

In 2019 she participated in the Dutch singing competition TV show Beste Zangers. The single version of her performance of "The Phantom of the Opera" with Henk Poort (the originator of the role of Eric in the Netherlands) reached #1 on the Dutch music charts.

In 2021, she announced she was working on a solo album. Her first-ever solo single "Fire"

was released on 25 March 2022. On September of the same year she also performed the Dutch national anthem at the Formula One Dutch Grand Prix.

She currently lives outside Gothenburg, Sweden with her husband Hannes Van Dahl (drummer for Sabaton), their daughter Freyja, and several horses, cats, and dogs. Her younger sister Irene Jansen also sings and has performed with her on several occasions. She's also old friends with former Nightwish vocalist Tarja Turunen and with several members of Epica, which former bandmate Mark Jansen and his then-girlfriend Simone Simons formed after he left After Forever.

Nightwish's "Ghost Love Score" was originally written for their first vocalist Tarja Turunen, but became a signature of current vocalist Floor Jansen during the Imaginaerum World Tour in 2013, culminating in this iconic headlining show at Wacken Open Air. The long vocalization at the end of the song has become known among fans of the band as the "Floorgasm".

Nightwish's "Ghost Love Score" was originally written for their first vocalist Tarja Turunen, but became a signature of current vocalist Floor Jansen during the Imaginaerum World Tour in 2013, culminating in this iconic headlining show at Wacken Open Air. The long vocalization at the end of the song has become known among fans of the band as the "Floorgasm".