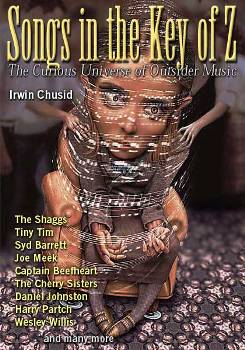 Book cover of Irwin Chusid's book Songs In The Key Of Z about the genre.
Advertisement:

Ever heard music that is So Bad, It's Good? Well, some amateurs happen to be quite interesting musicians.

) is music "sung" and "played" by amateurs who obviously are far removed from being professional talents. They sing off-key, can't carry a tune, can't play their instruments, are unable to read music or write bizarre, sometimes Painful Rhyme lyrics without any sense of song structure. To most people these musicians are basically something to laugh at, but fans of outsider music look beyond the cheap and easy laugh. As it so happens many of these bad musicians have a refreshing unconventional sound, far removed from the monotone, sterile and corporate controlled hits you hear in the Top 40. If they were musicians who consciously wrote cacophonic or otherwise bizarre music they would probably be hailed as innovators. The thing however is that these amateur musicians are actually more genuine and heartfelt in making creative and original music than professional musicians who try to sound different, but consciously never go so far that they would alienate their audience completely.

The genre itself has been around for a long time, with predecessors such as The Cherry Sisters and Florence Foster Jenkins. The rise of Camp in The '60s led to interest in these types of performers. The Shaggs and Wild Man Fischer managed to gain some attention, and one unquestionable outsider managed to get an actual hit single and some genuine stardom: Tiny Tim.

The "outsider music" concept was codified in The '90s by Irwin Chusid, a longtime DJ on New Jersey-based non-commercial radio station WFMU and aficionado of non-mainstream music. Chusid began featuring outsider artists on his regular radio show, and even started a spinoff show devoted entirely to them, called Incorrect Music, which ran from 1997 to 2002. In 2000 Chusid published Songs In The Key Of "Z": The Curious Universe of Outsider Music, where he devoted several chapters to artists deemed outsider musicians. Some of them are mentally unstable, some plain eccentric, others merely naïve and innocent, some very social like Tiny Tim, others don't want to see anyone, like Jandek, but they all share an adventurous, authentic and unusual style of music. Chusid also went to great lengths to differentiate between self-consciously odd professional artists like Frank Zappa, Velvet Underground and/or The Sex Pistols and musicians who are clearly not aware how eccentric and unique they sound, like Tiny Tim, Daniel Johnston and Wesley Willis. The latter category are the real "outsiders". Chusid notes that the line between those two groupings can sometimes be quite thin, and he included Syd Barrett and Captain Beefheart in the book, even though they're famous Cult Classic musicians; Barrett in fact started in the "self-consciously odd" category (being the original frontman of Pink Floyd) before his declining mental health thrust him into outsider status.

Chusid's book is still the best introduction to the genre. He's also put together some compilation albums with music by these artists than can be ordered online.