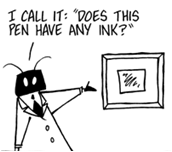 Sometimes, accidents happen. However, there are times where a coincidence is just enough to create some paint splatter or sculpture or other art form by accident. People see it, and even if it's not even meant to be art, they'll still think it's brilliant.

Congratulations. Your new masterpiece is the result of Accidental Art.

Often a Take That! aimed at True Art Is Incomprehensible. See also Mistaken for Exhibit.

When an accident creates a scientific invention it's Accidental Discovery.