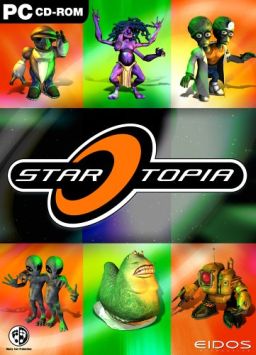 Meet your customers (and staff)
Startopia is a 2001 simulation game where the player is tasked with the administration of a toroidal space station in the aftermath of a galactic war. It met mediocre reviews, but became a Cult Classic. The developer, Mucky Foot, was founded by ex-Bullfrog Productions employees.
Advertisement:

The game is known for its Shout Outs and references to a numerous popular science-fiction shows and their respective tropes.

The singleplayer mode is essentially one large tutorial, with each mission focusing on one key element of the gameplay. The Kasvagorian Proud Warrior Race Guys will want you to violently attack and disperse squatters, while the profit-oriented Gem Slugs will want you to get rid of some opponents economically, for example.

Startopia is a surprisingly complex game, with the developers programming things to happen that the player might not realize. An extremely thought-out game guide online

For those who prefer their info in wiki form, the is also the Startopia wiki

This game is now available on GOG.com. The game recently released on steam.

Realmforge Studios announced a re-imagining of this game, Spacebase Startopia and is scheduled to release on March 26, 2021 for Nintendo Switch, Xbox One, PlayStation 4, Microsoft Windows, and Linux. View the announcement trailer here

This video game provides examples of the following: