"There are worse things in the shadows than you." 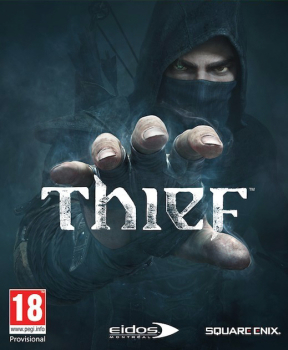 What's yours is mine.
Advertisement:

Thief is a 2014 Continuity Reboot of the Thief series of action-adventure stealth games, developed by Eidos Montreal and published by Square Enix on February 25, 2014.

The game follows Garrett, a master thief who can steal anything from anyone, but lives by a specific set of rules. After running into an old acquaintance named Erin, Garrett discovers a ritualistic ceremony overseen by Baron Northcrest, the ruler of the decaying City. Although he decides he doesn't want to interfere, Erin's actions disrupt the ceremony, resulting in her death and Garrett being knocked unconscious.

When he awakens, Garrett discovers that he is back in the City, he has little memory of what happened, and things are much worse than before, forcing him to investigate the circumstances behind the event and what happened to Erin.

The game originally began development in 2009 under the name Thief 4, but changed to the singular Thief as it went from a sequel to a reboot. Contrary to many popular rumours, the game was developed by a mostly different team within Eidos Montreal than the one that worked on Deus Ex: Human Revolution.

The game features many classic elements, including stealth missions, collectibles, loot and various non-lethal implements like the standard blackjack, as well as new mechanics like the "Swoop" maneuver, increased mobility with the new Claw device and more.

Tropes seen in this game: