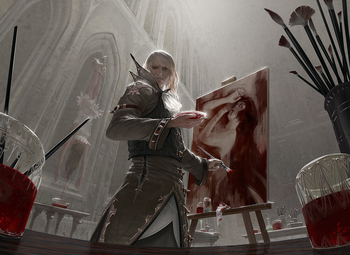 "Great art can never be created without great suffering."
"I now do what other people only dream: I make art... until someone dies! See? I'm the world's first fully functioning homicidal artist."
— The Joker, Batman (1989)
Advertisement:

The right-brain equivalent to the Mad Scientist, Mad Mathematician, and Mad Doctor. May work in any medium, but the subject is almost always evil (for a non-malicious version of this, see Eccentric Artist). They may make statues by dipping live people in concrete/wax, redecorate other people's houses with explosives, or try to get the perfect ending to their murder mystery novel by starting a real murder mystery. The unifying thread is that they always see a few incidental deaths as meaningless compared to the eternal majesty of their masterpieces.

Mad actors, artists, dancers, singers, and the like do outrageous and sociopathic things in public either as art, or so that people will pay attention to their art.

God help everyone if this character has art as an actual superpower. Just think of the terrifying monsters and objects they could create, the uses of the Anomalous Art they make, or even the terrifying potential in combat as an Art Attacker.

This character's motivation and descent into madness may be similar to their scientist counterpart, caused by a shunning from the community or a dismissal of their work as too crazy or unorthodox.

The Mad Artist is somewhat rarer a trope than the Mad Scientist since, while Science Is Bad, art is almost always good, or at least benign (even if it is angsty or incomprehensible). Some characters actually embody both tropes at once, combining horrific artistic features into works of insane scientific genius with the mad piece of artwork in question simultaneously being a product of mad science (Truth in Television, given applied arts combine art and science to the point of being indistinguishable, with artistic features being incorporated into science and vice versa). Similarly, a Mad Artist could use their expertise gained as a Mad Doctor or Mad Mathematician to work in creating their insane artwork (the Mad Genius archetype subtypes aren't mutually exclusive and overlap quite often). While a Mad Scientist can sometimes be one of the good guys, you'll practically never see a Mad Artist so venerated—to escalate into Mad Artistry, the artist must usually break too sacred a taboo (e.g. murder or torture) to be an acceptable good guy.

There is an element of Truth in Television with this trope. The list of creative people who have exhibited symptoms of mental illness is inexhaustible.note Although this is controversial, and evidence exists that the link between creativity and insanity is exaggerated. However, most Real Life Mad Artists aren't violent. They're much more prone to Angst.

For actual artists who draw for MAD (who may or may not qualify as this, depending on the point of view) see that Trope Page.