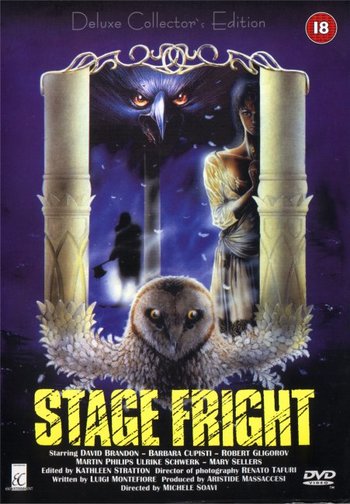 The theatre of death.
Advertisement:

StageFright -Aquarius- (a.k.a. Deliria, Aquarius and Stage Fright) is an Italian Slasher Movie with giallo elements from the year 1987. It is the first feature film directed by Michele Soavi, who also did Cemetery Man seven years later. The screenplay was written by Italian horror veteran Luigi Montefiori, better known under the name George Eastman.

The film opens with our main characters rehearsing the play by the name of The Night Owl. Alicia, one of the actors, slips away briefly with Betty to get some treatment for her sprained ankle. They visit the local psychiatric hospital, where Alicia runs to Irving Wallace, an actor who recently went crazy and gruesomely killed and mutilated 16 people. Irving manages to escape from the hospital and hitches a ride with the women to the theatre. He then kills Betty just outside the theatre. After Alicia finds her body, the police are quickly called to the scene.

After the police and the press leave, Peter the director convinces the main funder Ferrari and the cast to keep on practising the play, as the murder can get them more attention. To ensure the show going on, he locks up the doors, not knowing that Irving is with them and about to start hacking them up in various ways.

Examples within the film: