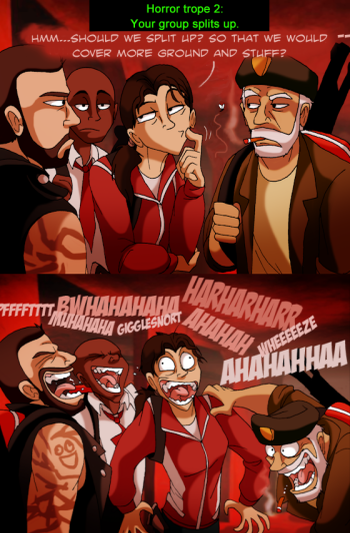 .
"Don't you know? You never split the party!
Clerics in the back to keep those fighters hale and hearty,
The wizard in the middle, where he can shed some light,
And you never let that damn thief out of sight..."
— Emerald Rose, Never Split the Party

The reverse of Let's Split Up, Gang!, this is when the whole party decides that they aren't going to split up unless forced to.

Sometimes it can be taken to indicate at least a minimal level of genre savviness, for example, in situations where splitting up means that one group will later have to go find the other group. It's also a clear win in horror films where the monster/killer will pick off each member one by one.

At other times, it's clear proof of Genre Blindness; if there's only one Big Bad, and the group is running from it, staying together means that the whole scene becomes the punchline of a joke: "I don't have to outrun the bear, I only have to outrun you." Additionally, staying in a group in that case makes it much more likely that when The Millstone trips and falls, they'll wipe out at least one other person as well. In this case, it might be deemed safer to apply Let's Split Up, Gang!.

This trope is extremely common in Tabletop Games and related media, where splitting up the party can make the game a headache to run. Almost always, a split of any length will result in some players sitting around doing nothing because their characters are not present, not to mention an overworked gamemaster trying to track and manage different locations at once. For this reason, tabletop groups often won't split up even when it would be tactically advisable to do so from an in-setting standpoint — or, indeed, when they have no logical reason to continue sticking together whatsoever.

It may involve telling Commander Contrarian or The So-Called Coward, "Fine, You Can Just Wait Here Alone." Or there can be an Involuntary Group Split.