"There is something out there..."
— Preston Rogers 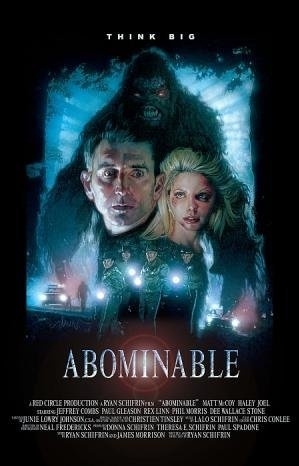 In the town of Flatwoods, Preston Rogers is being brought back home after months of rehabilitative therapy following a climbing accident at the infamous (and poorly named) Suicide Rock, an incident which killed his wife and has forever cost Preston the use of his legs; he is a paraplegic, confined to a wheelchair. His doctors have placed him in the care of dickweed physical therapist Otis Wilhelm.

Preston really doesn't want to be here, or anywhere, really, as he is depressed over his wife's death and such. The fact his house is in the shadow of Suicide Rock isn't helping his wounded psyche any.

When Otis leaves to run to the grocery store, a bored Preston decides to do some birdwatching with his binoculars when some college girls drive up to occupy the rented cabin across the road for the weekend. With little else to do that doesn't remind him of his wife, Preston alternates between watching the girls and watching the woods. Preston sees, out of the corner of his eye, something big and hairy swoop in and snatch one of the girls, and by the time he brings the binoculars up again, she is gone leaving only her phone behind.

Something is out there in the woods. Something big, mean and hungry...

No relation to the Dreamworks film of the same name, nor does it have anything to do with the book series.