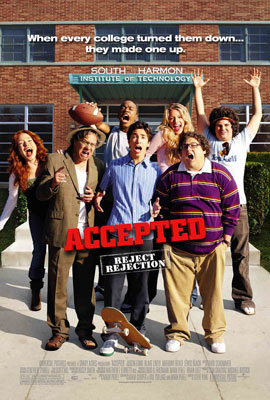 "These are the best years of your life. You get four years, enjoy them. 'Cause after that, you're fucked."
— Uncle Ben
Advertisement:

Bartleby Gaines (Long) has a problem. His parents want him to go to college, and he has applied to every college he knows of — but all of them have given him a polite "thanks, but no" letter in response. Bartleby is smart and innovative, two talents he has turned to such ventures as making fake IDs and pulling pranks, but which do not, sadly, extend to his grades.

His friends Rory (Maria Thayer), Glen (Adam Herschman), and Hands (Columbus Short) are in the same boat as him, but all for their own reasons. Hands, though accepted to numerous colleges, lost his football scholarship when he broke his leg and can no longer afford to attend the schools where he applied. Glen was not accepted anywhere due to his score of "0" on the SAT's. Rory was the most academically competent of the group, and could have gotten into numerous prestigious universities, except she had only applied to Yale, which did not accept her. What can they do?

Well, if every college has rejected them, they can make up their own, of course. With the help of Sherman (Hill), who has been accepted into the prestigious Harmon College, they make a fully-functional website for their fake school, and turn an abandoned mental hospital into a college building. They put forth Sherman's irascible Uncle Ben (Lewis Black) as the dean. Their parents are happy. Our heroes are happy.

Now they have a new problem: The "fake" website automatically sends an acceptance letter to any and all applicants — and now they have hundreds of fellow rejects to deal with. But Bartleby has a plan. Bartleby always has a plan. Now he has to figure out what that plan is...