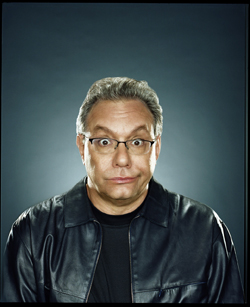 Gee, where to begin? Lewis Niles Black (born August 30, 1948) is best known as a loud, abrasive stand-up comic. He has No Indoor Voice. While the bulk of his work is based around political humor, including a recurring "Back in Black" segment on The Daily Show, he's also known for his angry observational humor. (Those shaking fingers? That's not palsy, he's just really really pissed.) He had a high profile role in the film Accepted, and has appeared in a number of other films and television shows, including a guest spot on (where else?) Law & Order: Special Victims Unit, and voicing the emotion of (who else?) Anger in Pixar's Inside Out.
Advertisement:

In 2008, he got his own show on Comedy Central, Root of All Evil. While he takes a back seat to the episodes' guest comics, he still inserts his trademark angry rants. A number of his acts include bits of Self-Deprecation, about himself and his fellow Jewish people, sometimes edging on J Word Privileges.

And of course, Lewis Black is king of the Cluster F-Bomb, using, in his own words, the word "fuck" like a comma.