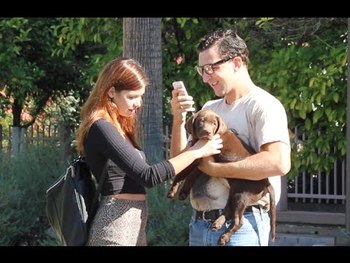 Olivia: You know, having a puppy really works on chicks.
Lucas: I've heard that
Olivia: Not on me though.
Lucas: Really? Because the whole reason I adopted Bella was to impress Olivia from the maintenance department.
Olivia: That seems to be your motivation for everything lately, I've noticed.
Lucas: Must be working if you've been doing all this noticing.
— A Dog's Way Home
Advertisement:

This trope is about the fact that women seem to be naturally fond of animals, and tend to show more interest in a man who has one or more.

Compare Pick Up Babes With Babes, Cuteness Proximity. Any kind of Animal Lover (such as Kindhearted Cat Lover and Canine Companion) can get this.

Alejandro doesn't need an adorable panda cub to charm girls, but it doesn't hurt his attractiveness.

Alejandro doesn't need an adorable panda cub to charm girls, but it doesn't hurt his attractiveness.