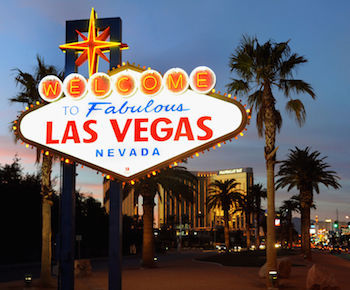 The most populous city in Nevada - over 75% of the state's total population lives in surrounding Clark County, mostly in the city and its immediate suburbs, which collectively forms the Las Vegas Valley - Las Vegas is famous worldwide for its ostentatious casinos, unrestrained excess, and nonstop debauchery. In actuality, it's more like The Theme Park Version of a Wretched Hive, with just enough free-wheeling enthusiasm to give visitors a rush of excitement without endangering themselves.

The city was founded in 1829 by a party of explorers traveling along the Spanish Trail to Los Angeles; its name means "the meadows" in Spanish, after the area's abundant grasses and desert springs. Incorporated in 1911, the city grew rapidly in the thirties, as Nevada's legalization of gambling and the construction of nearby Hoover Dam produced an influx of construction workers and tourists.

Ironically, most of the world-famous casinos of Vegas (and even the page image of the "Welcome to Fabulous Las Vegas" sign) are located in an unincorporated area called Paradise immediately south of the city limits, to avoid municipal taxes.note However, it should be noted that Las Vegas proper is the county seat of Clark County. The Las Vegas Strip, as it is known, is most popular in the evenings, where the neon lights and hotel attractions make it a uniquely scenic route. Downtown Vegas

is the other primary tourist destination for gaming and partying. Outside of these locations are several local and lesser-known attractions such as Red Rock Canyon National Park, Lake Las Vegas, and the Pinball Hall of Fame. The city gets over 40 million visitors annually, many of them from nearby Los Angeles.note In light traffic, it's possible to drive from L.A. to Vegas in under five hours.

Unsurprisingly, Las Vegas is a popular setting for many works, as its unrestrained reputation makes it easy to justify various sorts of comedic or dramatic plots. Several works are set entirely in the city, and there is even a trope solely about traveling to Las Vegas.

Not to be confused with Las Vegas, New Mexico.

Works set in Las Vegas (or feature it prominently) include:

Tropes associated with Las Vegas and the Strip include:

"Except herpes. That shit'll come back with you."